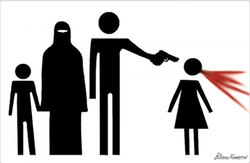 For my tenth grade English project, I chose to focus on the topic of honor killings in Afghanistan.

I created a web site as my presentation: click this link to be taken directly to it.

Below is a summary of my entire presentation.
Afghanistan is known to be the most dangerous country in the world for women. Afghan women have little say and little control over what happens in their lives. Many of them have attempted to speak out or take on public roles that “challenge ingrained gender stereotypes of what's acceptable for women" (Anderson). These actions usually end in a very specific type of death for the women: an honor killing.

An honor killing is a homicide, usually of a female, who has “brought shame or dishonor upon the family or community” by a family member. These killings usually occur when a woman or child refuses an arranged marriage, is in a relationship that their relatives disapprove of, is a rape victim, dresses in ways that are considered to be “inappropriate”, or engages in homosexual relations. These killings are a direct violation of the human rights of women in Afghanistan. In order to end these brutal acts, people around the world must become aware of these violent deaths.  Only then will these countries make it legal for women to have the same rights as men. ﻿
﻿WHAT ARE HONOR KILLINGS?﻿
The United Nations states that an honor killing is commonly referred to as the murder (or attempted murder) of a woman or girl by the members of her family (commonly including the woman’s mother and/or mother-in-law) who do not approve of her behavior (United Nations).

In Afghan culture, women and girls embody the family honor, and families gain and maintain respect through a woman's actions. If a woman does something with which the family and the community do not agree, it decreases the level of respect that her family maintains in the community. Women are therefore the first to pay the price if they are perceived to have offended a "so-called honor", custom or tradition (Amnesty International). These murders are therefore intended to "restore" the family’s social reputation (United Nations).

And by suggesting that the woman was killed for damaging her own "honor", the family implies that she brought the crime upon herself, thus making the crime legal (United Nations). And in many nations around the world, honor killings as punishment for offenses to customs and traditions is often an accepted defense  (Amnesty International).
HUMAN RIGHTS VIOLATIONS
According to the Universal Declaration of Human Rights, honor killing is an act that violates of multiple human rights.

First, honor killings are a direct violation of Article 1: Innate freedom and equality. This article states “All human beings are born free and equal in dignity and rights” (Claiming Human Rights). By violating this right, females and males aren’t seen as equals. Men are entitled to their own opinions and actions  Females with opinions and "nontraditional" actions, on the other hand, are faced with consequences.

Second, honor killings violate Article 3: Right to life. This article states that everyone is born with the right of "life, liberty, and security of a person" (Claiming Human Rights).

Third, honor killings violate Article 7: Equality before the law. All people are equal before the law, and everyone is entitled (without any discrimination) to equal protection of the law (Claiming Human Rights). This means that the law protects both men and women, although this is obviously not practiced in Afghan culture.

Fourth, honor killings violate Article 16: Right to marriage and a family. This article states that "men and women of of full age, without any limitation due to race, nationality, or religion, have the right to marry and [start] a family. They are entitled to equal rights as to marriage, during marriage and its dissolution" (Claiming Human Rights). If this right was enforced more often, there would be a drastic decrease in honor killings each year.

Fifth, honor killings violate Article 23: Right to work. Everyone is entitled to "the right to work", the right to "free choice of employment", and  "the right to equal pay for equal work" (Claiming Human Rights).
STATUS QUO
The United Nations estimates that 5,000 women die from honor killings every year (Crocker). This practice is a direct result of the following practices: discrimination against women and children (Bhatia), the traditions of caste systems, the patriarchal mindset, as well as an inborn belief in male dominance and superiority over females (Blood). An example of this “superiority” is the belief that that women should not be allowed to have certain jobs outside the house. The “socially circumscribed and male determined roles” that are unavailable to women are believed to be a necessity to maintain the social order (Blood). When women begin to show signs of being "uncontrolled" (such as applying for jobs believed to be "unfit for women"), men perceive this as a dangerous act that could potentially lead to societal collapse (Blood). But if there is already inequality throughout the country of Afghanistan (as well as other countries with this issue), then hasn’t society already collapsed by violating human rights and treating individuals unequally over something as insignificant as marriage rights and work rights?

Although women should be entitled to rights equal to those of men when it comes to making decisions in their personal lives, they are treated as if they have no say. Decision are made by the fathers, brothers, and husbands, and any challenge to their decisions is perceived as a “challenge” to the family, values and their culture (Bhatia). One common topic for disagreement is the subject of their marriage of a man from a different caste. The idea of a woman marrying below her caste is said to bring dishonor to the family because it is she decreases her family’s status in society. The family is “responsible for axing their daughter”, meaning death caused by her father or brother (Bhatia). The Afghan government is stealing a woman’s right to control her marriage, her job, her body; they are stealing her right to life.

Activists sometimes blame corruption,  the carelessness of police forces, and the “growing atmosphere of impunity” as the cause of this problem (Blood). But these are not causes, they are unfortunate effects of these human rights violations.
SOLUTIONS
The imbalanced between the difference in lifestyles that Afghan men and women have is an issue that must be fixed. If an Afghan man can marry a child far younger than him in an arranged marriage, then a women or young girl should be allowed to divorce their husband, flee their husband (for abuse or any other reason), and work in a job of their choice where male and female workers receive equal pay.

If violent acts such as honor killings go unpunished (Blood), or even acts occur that constrain women from having freedom, then there must be alterations to society. Whether it’s creating new laws or enforcing existing laws, there must be a change in society and its individuals. There also needs to be more exposure about this act in the news so more people around the world can understand what occurs when females try to claim their independence in a male-dominated country. Civilians must bring this issue to the attention of their elected officials in order for changes to be made by governments. And the government of Afghanistan must “adopt recommendations from United Nations member countries to abolish prosecution of women for so-called ‘moral crimes’” (Human Rights Watch).

One organization that works towards women's equality is "Women for Afghan Women". This organization provides "life-saving programs and services" for women and children who have been denied their human rights as victims of "forced and underage marriage, rape, forced prostitution, unlawful imprisonment, and barred access to education and employment" (Women for Afghan Women). Children whose mothers are imprisoned are able to take shelter as well. Women are provided shelter, food, and safety from abusive husbands and family members. Women are also taught to read, and learn about their basic human rights (Women for Afghan Women). Currently, this organization operates shelters in 8 of Afghanistan's 34 provinces (Women for Afghan Women) and has helped over 7,000 women in the past six years (Women for Afghan Women). Donations are used to provide shelters in each of Afghanistan's provinces, along with other necessities (funding for classes, healthcare, etc.).
HONOR KILLING VICTIMS
Bibi Aisha
After escaping her abusive marriage, Aisha’s father-in-law, Sulaiman, and (it is suspected) her brother, held her down and cut off her nose with a knife as punishment (Crocker). Afterwards, they left her to die from blood loss. Not long afterwards, she was found alive where she had been left to die. No trial was held, nor was there an interrogation of Sulaiman (Crocker).

Ten-year-old girl
A 10-year-old Afghan girl was raped by a 45-year-old mullah. She nearly died because the rape was very brutal and treatment was delayed. The girl’s father is under pressure from villagers to kill her because they say “she had brought shame to them.” She is being protected in a shelter (Kreiter).